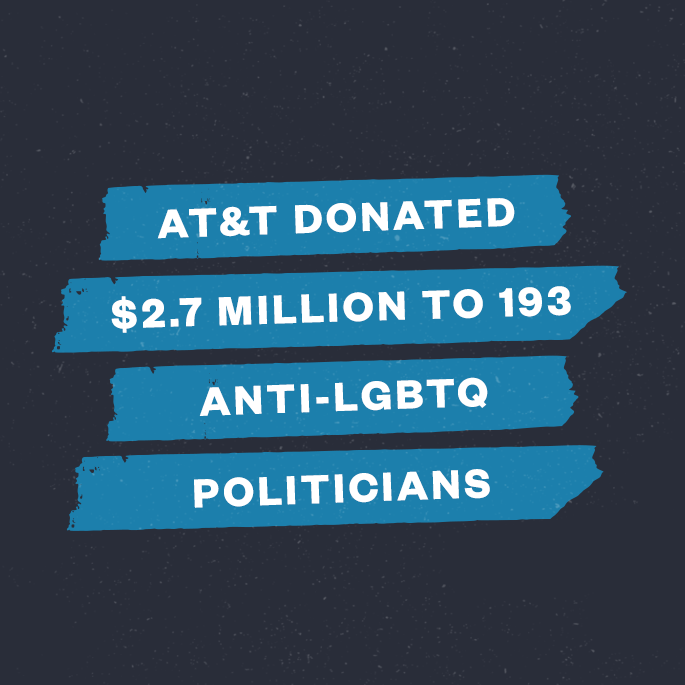 AT&T can rainbow-stripe its logo for Pride Month, wave the rainbow flag and claim it supports the LGBTQ community, but none of those things can make up for the fact that AT&T is directly funding politicians who are fighting equality and LGBTQ rights.

According to new reporting by Judd Legum at Popular Information, AT&T donated a total of $2.755 million to 193 anti-LGBTQ politicians in 2017 and 2018.

While AT&T has long touted its inclusive employee policies and support of LGBTQ causes, its donations to right-wing bigots tell another story. Here’s just a sample of the politicians AT&T contributed to during the last election cycle:

AT&T’s two-faced stance on LGBTQ rights is disappointing, but it’s not surprising: AT&T regularly courted extreme politicians to benefit its bottom line. The company donated $2 million to Trump’s inauguration to curry favor. It hired Trump’s fixer Michael Cohen to help influence the repeal of net neutrality regulations. It lobbied and donated to Republican politicians to ensure the passage of Trump’s Tax Scam, netting it billions while the company continued to lay off workers.

Here at CREDO, we don’t support anti-LGBTQ politicians – and we never will. As America’s only progressive mobile company, we donate to organizations fighting for LGBTQ rights like the Transgender Law Center and the National LGBTQ Task Force. And we mobilize our millions of members to take action to protect marriage equality and fight for transgender rights. In all, CREDO members have helped us contribute more than $12.7 million to progressive groups fighting for civil rights and have taken millions of actions to stand up for LGBTQ rights.

And unlike AT&T and other major carriers, we don’t slap a Pride flag on our logo in June – because we don’t need to. We stand with the LGBTQ community all year long.

If you’d like to learn more about how you can help fund progressive organizations and activism through your mobile company, click here to find out how you can make the switch and join CREDO Mobile.